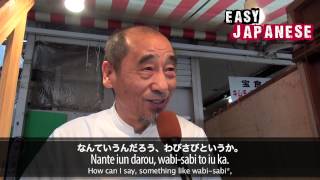 Learn Japanese with Easy Japanese: In our first episode of Easy Japanese Mona takes us around Sendai, asking people what’s typical Japanese to them!
***NEW: GLOSSARY***

GLOSSARY
Omoiyari: being considerate and thoughtful of the situation and the state of mind of someone other than yourself. The state of having compassion and sympathy toward others.

Omotenashi: Ways in which one welcomes, hosts, and provides service to customers in a heartfelt manner.

Yabai: an expression that indicates possible danger or inconvenience, but it’s also used to describe something that’s great, good, and cool.

Awa-yuki: snow that is soft as if it’s a bubble. It lies on the ground thin and melts away quickly

Wabi-sabi: the virtue of beauty in Japan. It usually indicates simplicity and tranquility.

Otaku: Usually an otaku person has nothing better to do with their life so they pass the time by watching anime, playing video games, surfing the internet – otaku is also used to refer to a nerd/hacker/programmer – “urban dictionary”

Easy Languages is an international video project aiming at supporting people worldwide to learn languages through authentic street interviews. We also use this format to expose our street culture abroad and create a more diverse image of our countries. Episodes are produced in local languages and contain subtitles in both the original language as well as in English.